This past Sunday was my first youth group after officially joining the staff. I was lucky enough to have a trip to Urbana Boulders as my first experience. So how Boulders is set up, is that it's basically rock climbing, but the walls are shorter so you have no harness and thick mats at the bottom for you to fall on. This was my first time doing such a venture, so I was excited. I was mostly excited because I am terrified of heights, and the walls looked doable.

That changed when I started climbing. 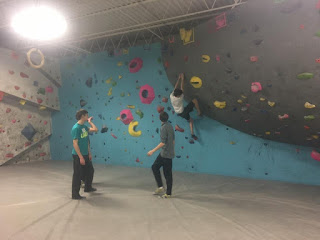 I have gotten much better with heights as I've gotten older, but the fear has never fully subsided. There's one instance in particular that describes my typical reaction pretty well. Growing up, I went to Riverside Lutheran Bible camp every summer. By the time I was in middle school, I felt like a pro every time I went up to Story City. However, one summer, my cabin took a trip to a new part of camp I had never seen before. It was a shock to me, finding new trails I had never been down before. It felt pretty cool, like I had been in on this secret that only the pros get to know. Then we came to the bridge. I was terrified. It was a rope bridge that looked like it had been there for decades. Images flashed through my head of the boards breaking under my feet, the bridge swinging uncontrollably, and me falling all the way down. Granted, it was just a small creek (or maybe a small part of the Skunk River? who knows) but it might as well have been the Mississippi to me. I was not going over that bridge. I began panicking and crying in protest. Eventually we left and found somewhere new to take our adventure.

Fear is not a feeling that sits well with me. Those who know me, know I like to act tougher than I am. I like to control every part of my life that I can. Fear does not collaborate with those ideas very well. There are lots of things I am not scared of. I'm perfectly fine around snakes, Halloween is one of my favorite holidays, I can get up and move 6 hours away from home without knowing anyone. Fear is not a normal emotion for me.

So here I am, climbing with youth from my new church for the first time. When I started, I was confident. These walls aren't even that high. I've probably climbed ladders this high before. Then my feet leave the ground. My support is on these holds and my heart starts to race. Are we sure this isn't too high to go up without a hardness? All in the meantime, most of these students have gone up and down multiple routes and testing their limits.

Paul was one of these students who was particularly agile on the wall. He didn't understand my fear. He knew I could make it up and down these walls. "Why are you climbing if you're so scared?" he asked. "Because sometimes you have to do things even when you're scared," I told him. I didn't even realize what I was saying until after I said it. 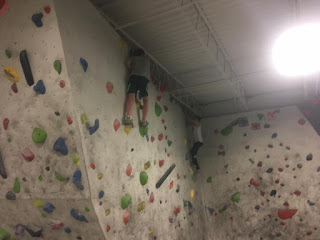 Eventually I got the hang of it. I was still a little petrified every time I got to the top of the wall. Some of the guys there climbed up and stayed up by the ceiling for a good chunk of the night. I don't know how they could be so comfortable doing that.

But you know what? I tried something new on Sunday, something I never thought I would be comfortable with. Sometimes is good to try something you're scared of. I'm glad these students are brave. Even the ones who had never tried climbing before were impressive that night.

Peace and Blessings,
Caitlyn Reinders
Posted by Caitlyn1129 at 2:37 PM No comments: