When I first arrived at Grace 2.5 months ago, one of the first requests I got was to have a 30 hour famine. The students were really excited by the idea, and from the conversations I had, it seemed like a strong tradition with the youth. I'll admit, I was a little leery at first. Spending 30 hours with students with no food didn't sound like fun for anyone involved. Hanger is a real thing, and if you add hormones to it... well I can only imagine.

But you give the people what you want right?

This year, we based the famine on the ELCA's Act 2Day 4 Tomorrow program. Normally, for a famine most groups will use World Vision's 30 hour famine. This is a great program, but being and ELCA church, it made sense to look at ELCA World Hunger as a resource and pull bible study tools filled with Lutheran theology. This included 3 different bible study sessions, looking at Matthew 25:31-46, Exodus 16, and Acts 4:32-37. 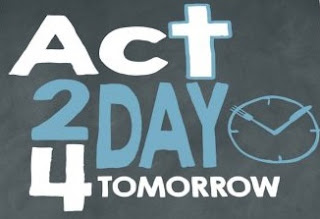 The other big thing we wanted to address was that this was a famine and not a fast. With the various diet restrictions within our youth and all the other things going on with their growing bodies, going a full day without eating didn't sound like the best plan. We still had 2 meals within the famine, and plenty of juice, crackers, and plumpynut in case anyone started feeling too hungry within the time frame.

Friday night, our first activity was watching a Netflix documentary titled Living on One Dollar (I highly recommend this film for all. You can learn more about them here: http://livingonone.org/). The premise is a group for 4 college students travel down to rural Guatemala to see what it's like to live on a dollar a day for 8 weeks. This included looking into a life of a 12 year old who's family couldn't afford to send him to school so he had to go out and work in the fields with this dad instead. This really helped our students see how good they have it here. We had a lot of good discussion on seeing how we live our lives here compared to the children in Guatemala and other stories and experiences we've had with children in poverty within the U.S. and around the world. Unfortunately, no one wanted to take a field trip to Pena Blanca to try the experience ourselves.

In this movie, most of their diet consisted of rice, beans, and bananas. This is what we based our diet on for the weekend and added tortillas and vegetables. We also based the way we distributed the food on the movie. The 4 men in the movie would have a raffle every day to see how much they would "make" that day, anywhere from $0-$9. With the students, their meals would either have 1, 3, or 5 items depending on which number they pulled. Luckily, for each meal the whole group came together to make sure each participant had enough to eat.

Saturday morning we did a Walk for Water simulation. This is a simulation that ELCA will often have available at events like the Youth Gathering. The premise of the simulation is to go through a course carrying a large container of water. Through the course you follow the story of someone who has difficulty getting clean water every day. For instance, Adele followed the story of a young girl in Indonesia who has to walk to get water every morning for her family, and normally misses school doing so. This girl broke her ankle on the trip, so Adele had to drag her foot behind her for the rest of the course to simulate that. There were many other obstacles and challenges throughout the course, with the final one being the clinic. Each participant was diagnosed with a disease associated with unclean drinking water, including malaria and diarrhea. 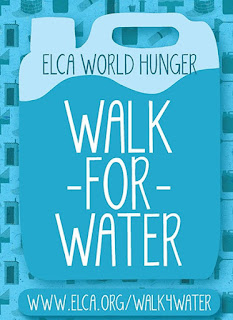 Saturday afternoon we did a poverty simulation. Each student was given a family that they would have to feed for a week. They each had a packet describing their family, their living situation, and their budget for food for that week. I threw in a twist and gave them each their "children" in the form of stuffed animals borrowed from the nursery. There were 4 different stations involved in this simulation - the grocery store where they could purchase food, the food pantry where food was given out, DHS where they could apply for SNAP benefits, and DCFS that would be watching for abused or neglected children. They had about 30 minutes to collect all the food they needed for their family. Some went to DHS, but realized they would have to wait in a line that never seemed to move. Once it was their turn, they had a 20 sheet packet to fill out to apply. Even after doing all of that, some of the families didn't qualify for benefits. There were also limited resources at the food pantry. Then there was also the issue of the "baby snatching" DCFS finding neglected children and fining the family if they were taken into DCFS's care. After the allotted time, they had to go through what food they had and plan the meals for the week. Not one of the students had gotten all of the food they needed. They were all frustrated and didn't know how they could finish completing the meal plan. There were many refrains, of "I don't know how to do this." They realized that there are families that have to do this every day. They became more proud of our food pantry, seeing how hard it can be to make ends meet for a family struggling to get food on the table.

The last thing we did was have a alternate version of Monopoly. Not only did I imply "Reinders rules," on the students, but there were other challenges each of them had to face. Andy couldn't buy any blue properties, Abby only started off with $100, Paul had to pay double rent and couldn't get free parking, Mikayla could purchase properties on half of the board, and I couldn't buy railroads or utilities. This was all to show that not everyone in life gets to start with the same privileges. Some start off much better than others, and each person has their own limitations and obstacles. We didn't get to finish the game (but lets be honest, how many games of Monopoly ever get finished?) but we played long enough for them to see how life just isn't fair sometimes.

The overall theme of the famine was for everyone to see the problems that people all over the world have to face when it comes to poverty and hunger. It's not just in rural Africa, it's right here in our backyard. We can also help in many ways. As students, they can't all buy meals for people or donate to food pantry. They can, however provide their time and attention. Sometimes all a person needs is to know others see them.

We've already got requests to do it again, so I encourage everyone who can to do it next year!