So you've been baptized - Now what?

Grace had a group of 19 youth, 2 young adults and 6 adult leaders go on a trip up to Wisconsin to spend some time at the Expeditions Unlimited camp. It was a great mix of people who had gone before, and first timers like myself. The theme for the week was baptism, focusing on things like sharing our faith with others, and what struggles we share, and what tools we have to support each other within our community.

Starting off, we had a nice long drive up to Boulder Lake Park in Wisconsin (I may have had a hard time finding exactly where the campground was...). BUT we all made it there! We got settled into our tents, and had a nice bonfire for the night. There, we did our evening worship and devotion, and even got to make s'mores. Once we got settled into our tents, it began to storm. Luckily, most of us stayed dry through the night, and some of us even managed to get some sleep! 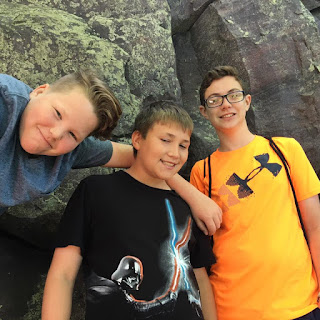 Monday was our day for WWR (White Water Rafting). After breakfast, we had our morning worship and devotion. The theme for Monday was the story of Philip and the Ethiopian Eunuch, thinking about how we share our faith with others, and of course - getting wet!

We got to the river, suited up, partnered up, and headed up to our starting location. We started off with two different rapids, first one being a big drop then going through a few more level (but tricky!) rapids. A few of us got stuck along the way to lunch. After making it through the first two, we stopped at a bank and had our first cliff lunch.

After lunch, we had our afternoon prayer and our 10 minutes of silence on the bank. Throughout the week, we had some pretty cool places to stop and think, but the river might be my favorite. To get everyone amped back up for rafting, we got to try body rafting. Basically, you float with "nose and toes" up and float down the rapid then swim to shore when you get through. It was much harder than it sounds, but it was so much fun!

We went through 3 more rapids through the afternoon, and even found some shallow water along the way to have a more relaxed float. That was juxtaposed by the final rapid, which fastest, longest, and most exciting rapid of them all. By then, we were all were spent (but very happy!) and ready to head down to Baraboo. We got back pretty late, so we ended our night with a quick prayer by the entrance and got everyone settled into our cabins for the night.

Tuesday was slotted for rock climbing. The theme for the day was John the Baptist, and finding our own road to Jesus. So, after breakfast, morning worship, and devotion, we headed out to Devil's Lake and tried a new spot to rock climb. We ended up at Elephant Rock, which gave us four different cliffs to climb on. We had lots of different climbers all morning, and I was very impressed with how well some members from our group did on all four cliffs. With all the climbing in the morning, some were ready for a new adventure in the afternoon. A few went on a hike around the lake, some came together to play games, and others couldn't get enough of the climbing. 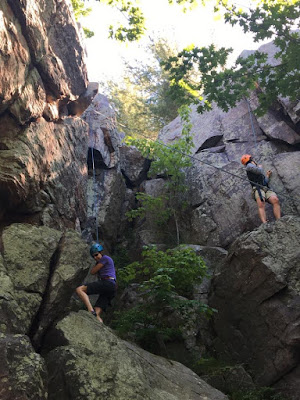 That night, after MANY inquiries, we FINALLY went swimming in the lake. (If I had a dollar for every time I got asked if we were going to be able to go swimming, I probably could have paid for the whole trip 😊) But we had a great time at the beach!

Then we made it back to camp and had a great bonfire for worship. This was also the first night we had time to do have small group discussions. All throughout the week we had AMAZING discussions within our small groups.
There was morning and evening on the 3rd day, and it was GOOD!

Wednesday was the day that got the most hype - it was the day of the high ropes course. The theme for the day was Jonah and how to deal with times where we don't trust God or get angry with God. 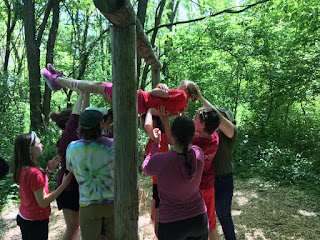 The students started off with the low ropes/challenge course while the adults *silently* observed. It was a chance for them to solve the challenges on their own and see how well they can work together as a team between their two different groups.

After lunch it came - the high ropes. Most of the students were extremely excited about this, while others were rather hesitant. I was all for Team Hesitation. For those of you who don't know, I have an extreme fear of bridges. I get pretty uncomfortable with some heights (as stated in a previous blog), but most of the time I can deal. Bridges, however, are a different story. Seeing as though a high ropes course is basically a series of bridges, I did not make it past putting both my feet on the first bridge. I was only one of 4 people out of the whole group that didn't go on the course, so I think overall we had a really good amount of participation. 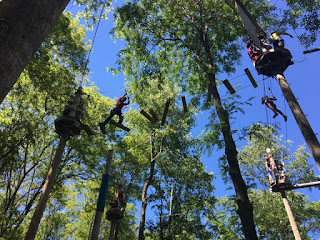 That night after dinner, we had our evening worship in the "BatCave" (the room below the dining hall). We had our second round of small groups that night as well, and continued to have great conversations with new groups.

To try to give everyone some down time to have to recover for all the activities that have happened throughout the week, we had movie night after small groups. The movie for the week was Evan Almighty. For those who haven't seen it, it's the sequel to Bruce Almighty (where Jim Carey is hilariously given God's powers to what it's really like to be God), and this time, Steve Carell is called to "change the world" and build an Ark.

And it was morning and evening on the 4th day, and it was STILL GOOD!

Thursday we had some free time in the morning since we went to the International Crane Foundation in the afternoon. Some of us went canoeing in the morning, others stayed and played on the beach, while others got a chance to do some crafts. The theme for Thursday was Noah, and what we do when the people we look up to turn out to be not so perfect, and learning that we're not always perfect either, but our faith gives us tools to see God loves us despite our flaws.. 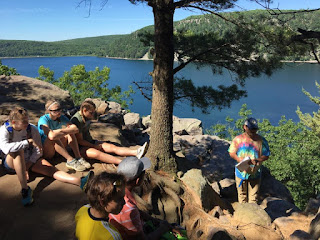 So in the morning, I went with the canoers to go on Devil's Lake that morning. I don't think we could have asked for a more beautiful week to spend outside in Wisconsin. The group that stayed on shore had a great time playing spike ball, and others continued working on their awesome crafts.

After lunch, we made our way to the International Crane foundation. We learned they are the only place in the world that hosts all 15 species of Crane, including the two that are native to North America. They do amazing work, trying to rebuild the crane population all over the world, doing research on breeding, habitats, migration patterns, and so many other things that we would never think of that affect these birds. It was a great opportunity to learn something new for the whole group.

When we got back, we had our final bonfire, which included roses, buds and thorns (like highs and lows for the day, which we tried to do every day) and also one rose for the whole week. There were many different week-long roses from the group, ranging from WWR to gaga ball. I was just really glad to get the opportunity to get to know a lot of our students that I normally don't get a lot of time with, or haven't been able to spend much time with over these last few months. 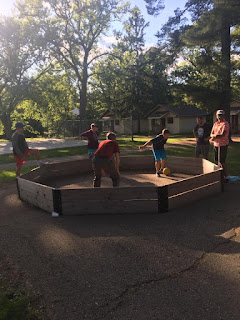 Overall, this was an amazing week for everyone involved. I want to give a BIG thank you to all the adult leaders who came on this trip (I really can't thank them enough), and to all the students who decided to join us. We learned a lot about ourselves, each other, and what role Jesus plays in all of our lives. This is a great ministry we have at Grace. Thank you to all those who make it possible!
Posted by Caitlyn1129 at 3:13 PM